Practicing Number Recognition on the Drum

I'd have to say the overall favorite instrument of the children I have worked with is the gathering drum. Unfortunately this has been the least favorite instrument of the adults in close proximity to my office!
The gathering drum has a warm reveberating tone that absolutely draws children in and makes them want to hit it again and again - so obviously one skill we work on with the drum is impulse control!
The following exercise requires impulse control and encourages number recognition and the connection between the visual number and the harder concept - "number sense".

I made a set of number cards - each number on its own 3 X 5 card. On each card, the number had the corresponding amount of balls. 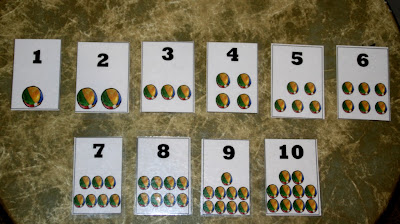 I place the numbers on the gathering drum and tell the child I am working with that we will get to play the drum upon completion of this "game". Begin by practicing counting 1 - 10 while pointing to the number on each card.
Then pick a card - I usually start at the beginning with 1. Tell the child you are going to hit the drum 1 time. Encourage the child to also play the drum 1 time and point to the ball on the card as they do. Once they are able to hit the drum just one time, go to the 2 card. 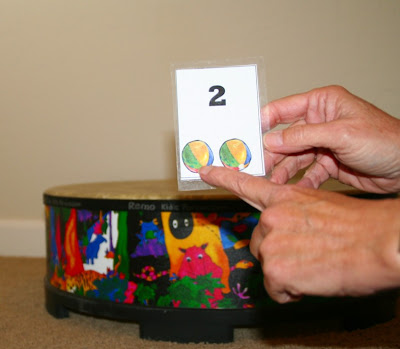 Count to two while pointing to the balls. Ask the child to do the same. Then once again tell the child you are going to hit the drum 2 times. Ask them to do the same. Repeat with each of the cards until the child is able to hit the drum the correct number of times on the drum. At the end of the exercise, reward them by letting them play spontaneously with their hands - and play along too if they will let you!
Once the child has mastered this exercise, you can shuffle the cards, have them pick a card and play the corresponding number on the drum.
As a final step, once the above exercises have been mastered, I will encourage the child to do this activity with one mallet. This adds an additional level of impulse control, so be sure they have the first steps mastered before handing over the mallet! 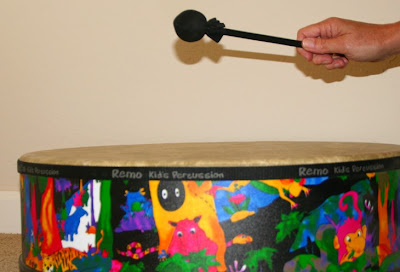