One of the components of most of my sessions is movement to music. Face it - it's just fun and kids usually respond with little prompting when you turn on some music and ask them to dance!
I have a favorite set of streamers that I purchased through West Music. Colored scarves also work.

Choose (instrumental) music that will encourage steady movement, but will not compete with your spoken instructions. For this particular activity, I enjoy using Unaccompanied Cello Suite No. 1 in G major with Yo Yo Ma. The song has just the right variances in dynamics and encourages graceful movement.

When doing this activity with a student for the first time, I allow them to pick 1 colored streamer of their choice requesting the color by name if possible. 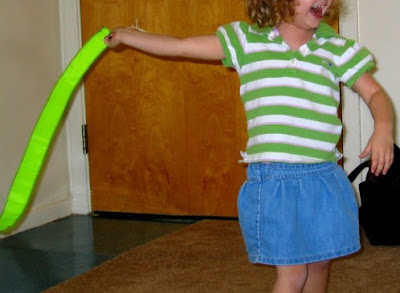 Then, as we move to the  music, I will give directions such as up, down, up, down matching the rhythm of the music and giving ample time to respond. I prefer using verbal and visual cues while doing this activity, but some children may need some gentle physical prompting if they are having difficulty understanding the movement. Other directions may include way up high, way down low, and 'round and 'round. You might even use fast and slow in the mix.
Adding another ribbon adds another movement dimension, but once they've mastered the concepts with one ribbon, I ask them if they'd like to use two! 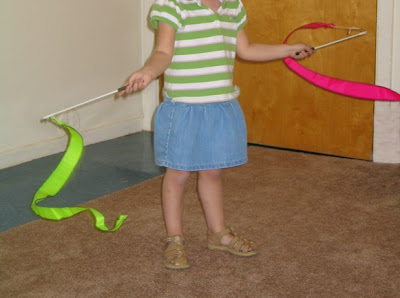 Many of my students have responded well to being the leader during this activity. After following my instructions, I ask them if they would like to be the leader.
I always end this activity with some free movement as they may have had to use a lot of impulse control during the activity to stay on task. Verbal encouragement to stay on task is much easier with the promise that they will get to move any way they want at the end!
Posted by pamelela at 11:36 AM