I love my purple dot. I have had it for many years and used it with many of my clients. I got it while working with an adorable six year old boy with autism. You see, Andy could not sit still. He would fidget so much with his hands that it made it difficult to work on some activities. His fidgeting would start with his hands and eventually cause him to jump up and move or spin. He obviously had a sensory disorder and I wanted to help him.
I came across my purple dot in a sensory integration catalog. It was called a Disc-O-Sit and came in two sizes. I quickly ordered the larger size (15 inches) and waited to receive it in the mail. It came a couple of days before my weekly session with Andy and I could hardly wait to introduce it to him. 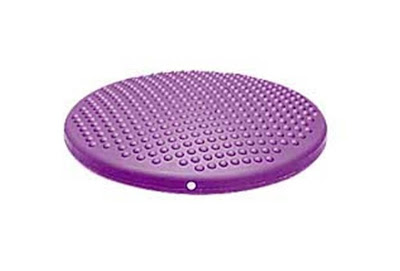 On Thursday, Andy came in for his session. We sang a hello song and then I  brought out the puple dot. Andy took his index finger and touched one of the bumps. He then picked it up and threw it across the room! Not the reaction I had hoped for! We went on to another activity and I brought the purple dot closer again. After touching one of the bumps, he kicked it away - but not as far! By the end of the session, Andy allowed the dot to sit next to him and he would occasionally reach over and touch it.
To make a long story short, Andy grew to like the purple dot and would look for it as soon as he came to his session. He would sit on it during activities requiring the use of his hands and it really appeared to help him. The dot has some air in it and while sitting on it he was able to move and rock from his waist which then helped him focus on using his hands.
If your child has difficulty sitting still while working on activities, you might try getting a dot of your own!
Posted by pamelela at 6:40 PM