Months of the Year Songs to Familiar Tunes

Well, now that we have the Days of the Week covered by familiar tunes, let's move on to Months of the Year! I still remember a song I learned in Kindergarten - just a few years ago! It was a song that listed the Months of the Year to a catchy marching tune - and we would march as we sang it! To physically experience the song and its rhythm and melody probably set it even firmer in my little mind! Wow - the power of music! I still find myself humming it on occasion. Here is a lead sheet with the words, melody and guitar chords in case you would like to try it! 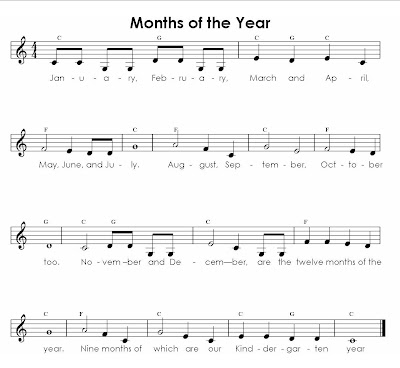 I have two other versions of the Months of the Year set to familiar tunes that I have used over the years. They are:
Months of the Year to the Battle Hymn of the Republic
January, February, March, April and May,
June, July and August, then September's on its way.
October, then November, then December's at the end.
And we start all over again!
Months of the Year to Ten Little Indians
January, February, March and April,
May, June, July, August and September,
October, November and December
These are the months of the year
Two things I have learned when using familiar tunes to teach concepts.
1. It is probably best to pick one and stick to it. Several times I have tried to switch the tune and I end up getting confused and confusing my clients!
2. Some children may have difficulty using a familiar tune with different words. One of my clients, who has autistic tendencies, will now sing the new words, but has the need to talk about the common or "real" words to the tune each time. I beleive this has turned out to be a good experience for him because he has been able to "change the routine" just a little!
One more song that I an across a while ago can be found at this website called Education Oasis:
http://www.educationoasis.com/curriculum/Music_Movement/months_songs.htm
It is the Months of the Year to the Macarena! Fun!
Posted by pamelela at 11:38 AM